Finding a glass company that has the skill to replace the windshield in your classic BMW can be a very challenging task in 2016. Your E30 most likely sports its original windshield or has one that was last replaced several decades ago. Over time, pitting of the front glass can make it nearly impossible to drive in sunny conditions due to the solar glare and reduced visibility.

I recently paid a local glass company here in Connecticut to replace the cracked, pitted windshield in my 1987 325is and they were the worst company I have ever hired for anything. The technician that came out did not have the skills to install the new glass in this classic BMW, which is more difficult than new windshields that are simply glued in with a special adhesive. The old school cars with a lock strip and rubber gasket take time, patience and expertise to properly install without damaging anything. 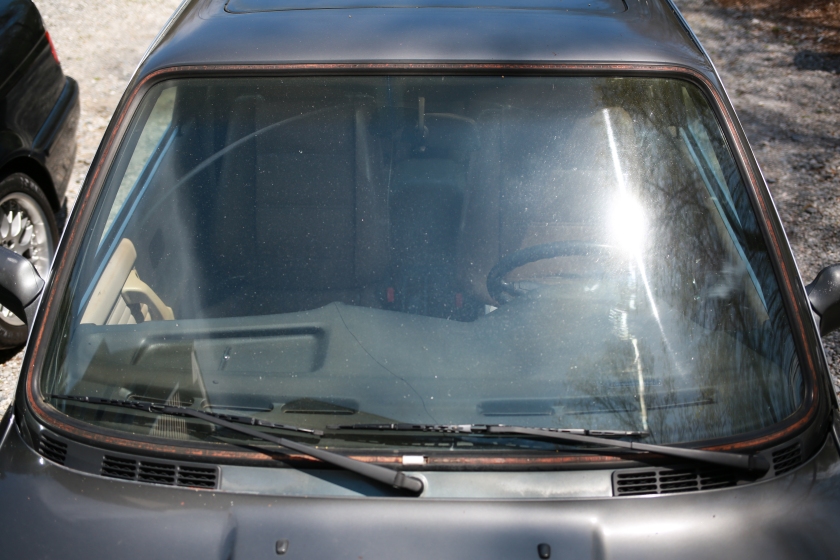 Later on I found out that the lock strip tool this technician used was broken in half so that the metal guide loop literally was no longer a loop – it looked  like a fork with two sharp metal prongs. Despite this, he continued to try to install the new gasket and lock strip with this sharp, broken tool which resulted in him literally shredding the new lock strip and gasket which together were over $180. I was furious that the technician thought this was totally acceptable. I told him to remove his glass, go home and refused to let him touch the car again. Below are some photos of the damage he did to the new gasket and lock strip – he thought it was perfectly acceptable. There were several areas where he punctured the gasket with his broken tool.

The new chrome lock strip was scratched and gouged throughout the entire length of it from the use of his broken tool. He did not use any lubricant either, a total amateur.

The next company I called was Safelite Auto Glass, which was much more professional from start to finish. They have their fair share of negative reviews too, so your mileage may vary if working with them. Upon calling, I spoke with a service manager about the age of the car (1987) and they sent out a technician who was in their 60’s and had over 30 years experience working on vintage cars. To make things even better, the glass they installed was made in the USA and looked to be of high quality. The tech had a set of new lock strip tools and knew how to use them along with lubricant (he used this glass cleaner) for the installation.

The installation took a little over an hour from start to finish and the end result looked great. The new chrome strip and glass transformed the appearance of the car, considering the old one turned brown and cracked after decades of sun damage. I used a new genuine windshield gasket and chrome lock strip for the 1987 model. From 1988 on the E30 used a black lock strip, found here.

Now, it is definitely possible to DIY this project yourself with the help of a friend, should you lack confidence in the ability of professionals in your area. From what I’ve seen it may be your best option if you can’t find someone with the skill to install a new windshield for you. Of course, BMW dealerships probably will have the skill, but their quote will be something close to $1000 or more to install their factory glass by a factory trained glass tech.

What You Will Need

4. Order the windshield glass from your local dealership or a third party like Safelite.

6. Nylon plastic pry tools to force the new gasket onto the metal frame of the car.

7. Patience. A lot of it, this job is frustrating at best.

Have you had a good or bad experience with a glass company? Let us know in the comments below your experience.