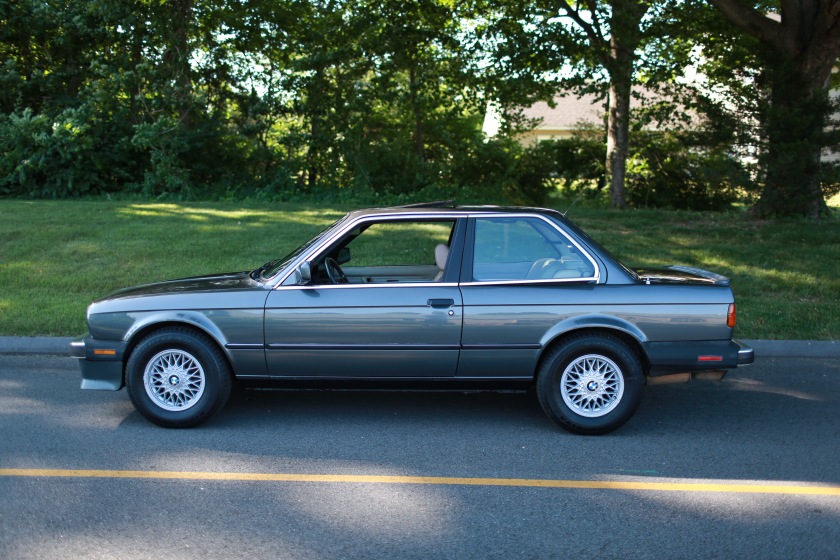 The time has come to sell my Delphin Metallic 1987 325is. I started driving E30’s back in 2003 after purchasing my first 325i for $700. It was arguably the coolest cheap car you could buy back then. These days, a 325is in original form commands more dollars and more respect after many years of flying under the radar. The secret is out: the E30 is a bonafide cult classic. 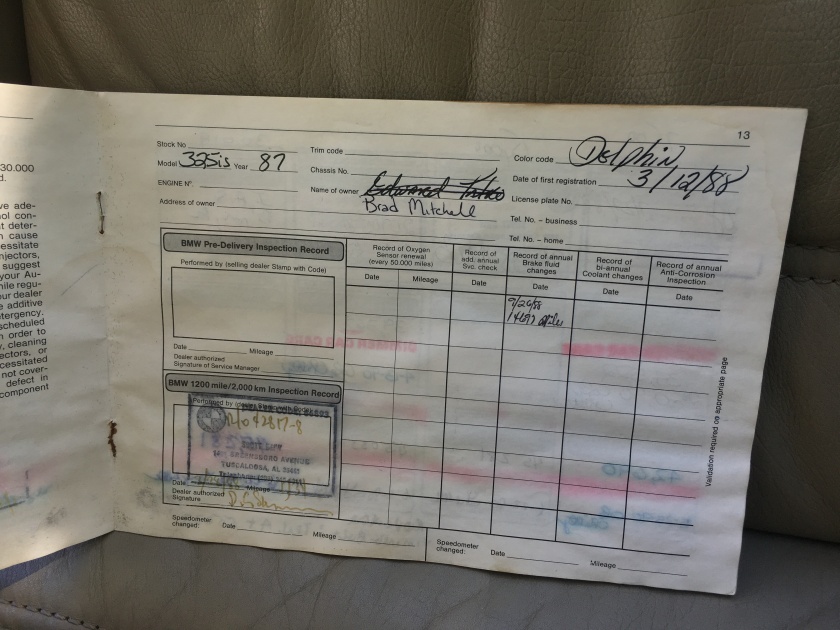 This 1987 325is spent its entire life free from salt, winters and rust down in Alabama. It was originally sold by Scott BMW in Tuscaloosa and first registered on March 12, 1988. Reagan was in office, Bloodsport was in theaters and life was simple. One hundred sixty eight horsepower in a German tuned sports sedan pretty much sold itself. It was a time when German mechanical engineering gave birth to thrilling sports sedans with little interference from complex automotive computers.

I bought this car in 2014 from an enthusiast in Alabama, who bought it from his elderly neighbor. I had the car shipped up to Connecticut for about $600 in an enclosed trailer. Since then, it has been stored in my garage and driven to the beach or around town on weekends. It has never seen snow or salt and is totally rust free. Many small projects have been completed during my years of ownership, which have all been recorded and uploaded to my YouTube channel here. Here’s a spreadsheet I created that cover the repairs and money invested during my ownership:

The odometer was broken when I purchased the car and it appears it had been broken for some time. I removed the cluster and replaced the odometer gears, so mileage is being recorded once again. The car is very original with only a few factory modifications.  An E30 M3 interior was swapped in, though the original rear seat with build sheet is also included in the sale. 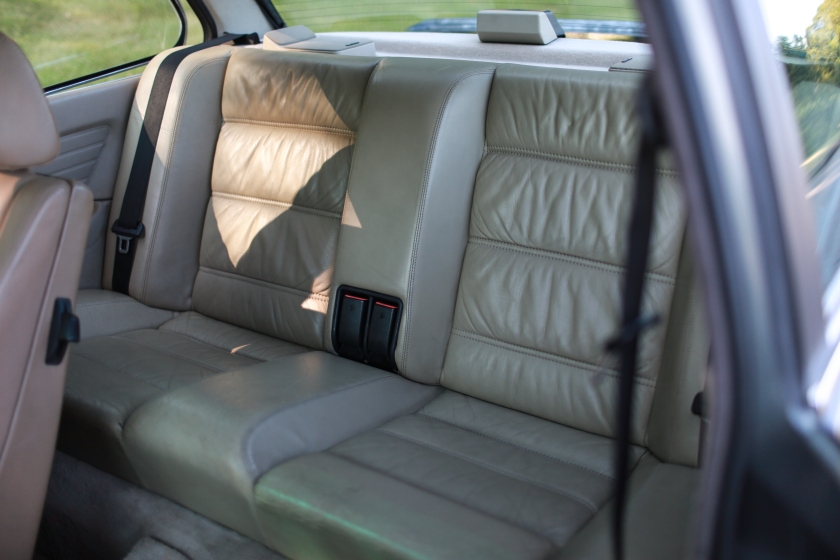 US Spec OEM Hella Ellipsoid headlights from a 1989 model E30 were installed in place of the sealed beams. New OEM euro grills and a new chrome center kidney were installed at the cost of $200. No cheap replica parts used here – all made in Germany.

Overall the car presents very well. The flat surfaces of the car including the hood, roof and trunk have tree sap dots on them from sitting down in Alabama under a tree. I scrape a few dots of sap off with my finger nail from time to time. Someone with more patience can complete that job over time. 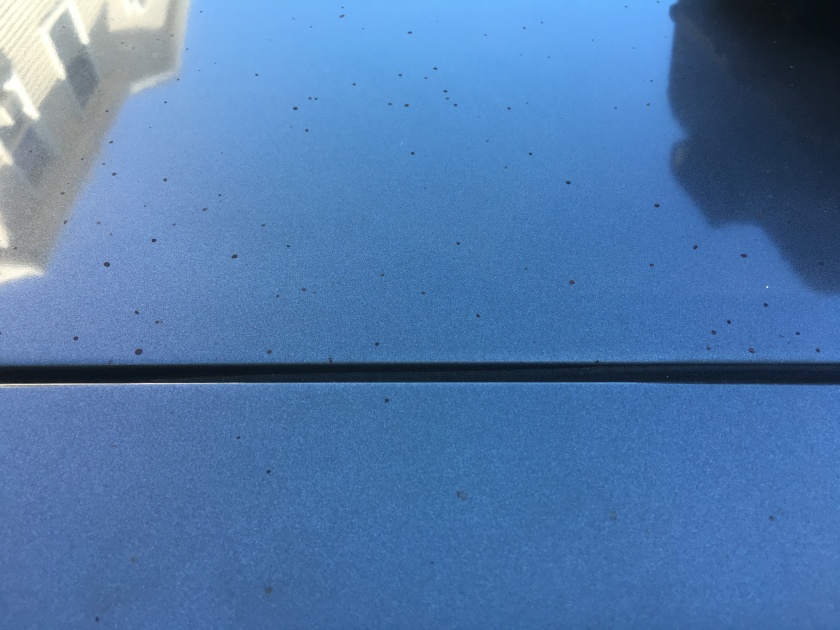 The car is totally rust free. This is the first Southern car I’ve bought, and the way the dry heat preserves a car is unbelievable. I would never purchase another New England car again after owning this one. The premium you pay for the shipping from the South or West is totally worth enjoying the absence of rust.

The 325is has its original 14” BBS weaves and slightly oversized tires thanks to the previous owner. Surprisingly it still rides fine, but the proper 195/65/14 tires should be installed in their place by the new owner. The original spare is present in the trunk. Original vent sport windows in the rear work great.

Miraculously, the dashboard is totally crack free. The E30 M3 seats hold you in around the twisty back country roads and give you that E30 M3 feel. The original M-Tech I steering wheel leather is worn at the top but functional. The M-Tech badge on the steering wheel was replaced with a new OEM one from the dealership. The new OEM leather 5 speed M-Tech shift knob was installed and feels great shifting through the gears. The original shift linkage is sloppy and could use a freshen up with a short shift lever. The wire cupholder pictured has been with me for 10 years and is not included, sorry! 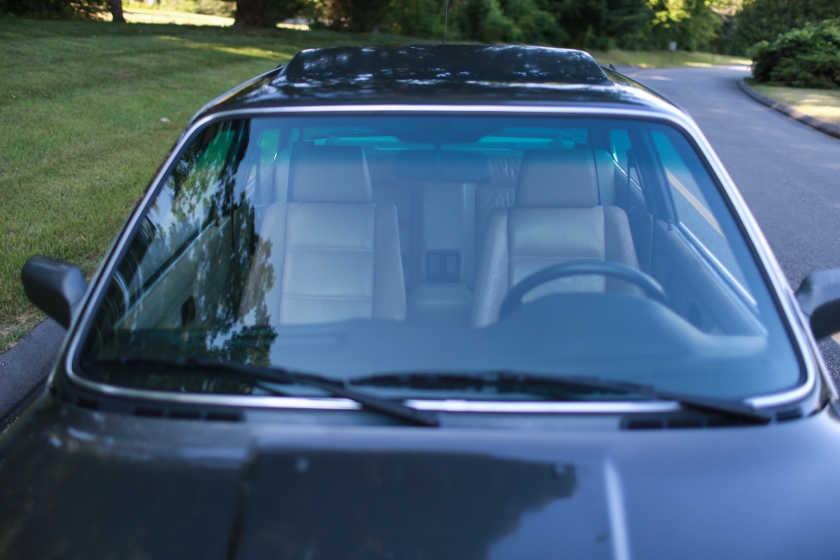 A new USA made windshield was installed along with an OEM gasket and chrome lock strip. It was not cheap or easy to find someone with the skill to get this job done correctly. Driving with a new windshield is amazing, no sun glare and no pitting! Very satisfying to look through while driving.

The passenger side door up top by the chrome trim has a slight ding that was hard to photograph, but looks like a great candidate for paintless dent removal. Generally speaking the body is very straight on the car. It does appear to have been repainted at least once in it’s 30 years of life. All VIN tags match throughout, with the exception of a BMW DOTR tag on the trunk lid. It must have been replaced by BMW early on in the car’s life. 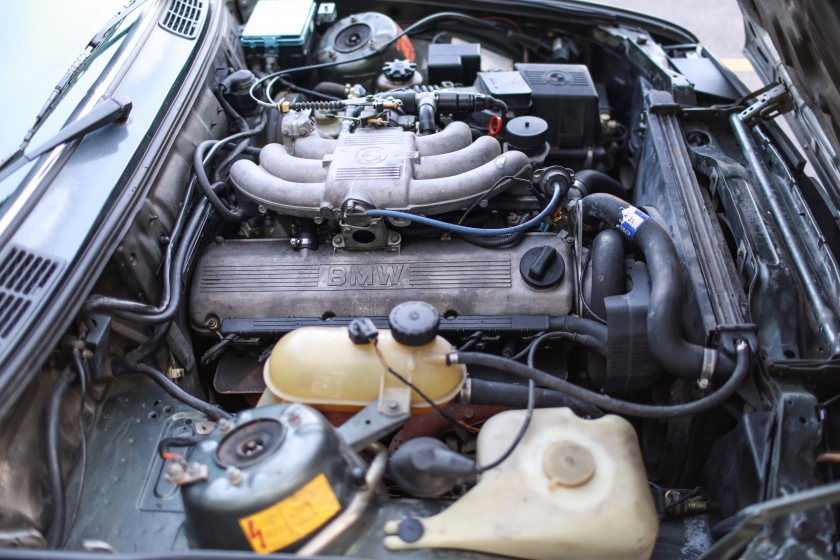 Under the hood is the stock M20 inline SOHC 6 cylinder engine. I replaced the spark plugs with Bosch copper plugs, changed the oil with Mobil 1 15W-50 weight for the summer and a Bosch oil filter. An OEM throttle cable was also installed. A valve adjustment was just done along with a new OEM valve cover gasket. Below is a video I took of the car running.

The car runs well and has a remarkably smooth idle for an M20. It does have a very small exhaust leak from the mid pipe which will need to be replaced or addressed. The original steering rack also leaks, which is just a good excuse for the new owner to swap in a close ratio E36 steering rack. 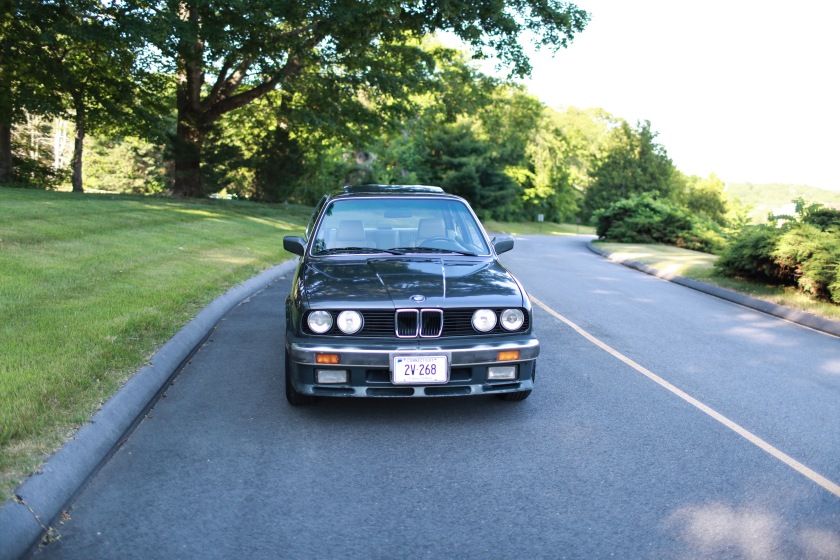 I took the car for a drive a few weeks ago and recorded it on my GoPro in 4k to help give you a better feel for the car. And just to watch this back once the car is sold.  The sound is not great (thanks GoPro) but you get the idea.

The bushings appear to be original in the car, so it could use a refresh including all of the various ancient dry-rotted bushings. The rear end has a clunk when shifting between gears, which feels like a bad differential bushing but could also just be a really worn out differential. A good used E30 LSD differential can be had for $3-400 and a bushing might be under $35. 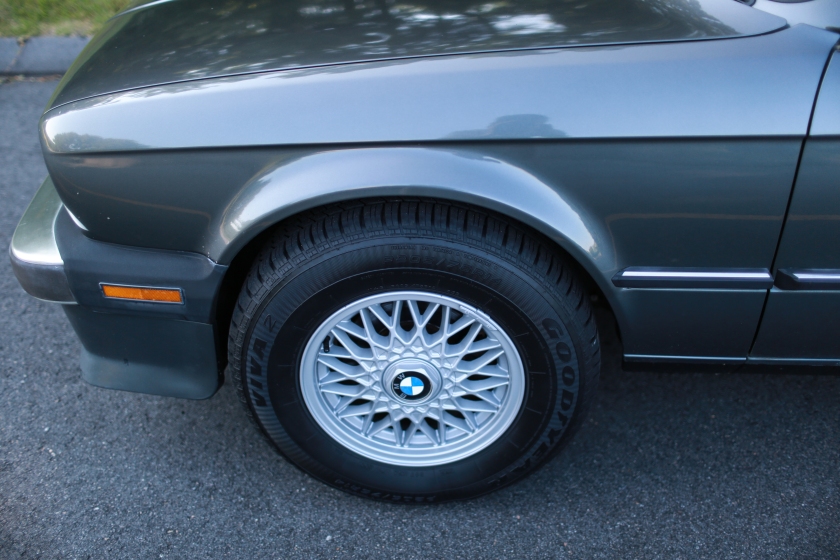 The rear vented sport windows are a nice feature on this 325is. Most models came with the fixed rear windows, and it’s a cool feature to pop these out on an autumn day and drive with the windows down and the sunroof open.

The original rear seat pictured below is also included with the car. It has the factory build sheet still attached beneath the foam. The seat currently installed is from an E30 M3 and is a very nice OEM upgrade. From inside, you almost can’t tell that you’re not driving in an M3.

The best place to list a classic German car these days seems to be the auction site called Bring a Trailer. I have listed my car on their 7 day auction, where you can register to bid. Any last minute bid sniping is mitigated by their unique auction system, where the clock resets to 3 minutes after a last second bid. Everyone has a fair shot at winning, and cars have a better chance at selling for a fair market value.

So, what’s the reason for the sale? I’m getting married next month in NYC and we have a house under contract. All good things, but I just can’t afford to keep it along with our other cars.

Still curious about some of the repairs made on this car? Check out these 25 videos I made about repairs done to this car during the last few years of my ownership.

Click here to see the auction for the car now!